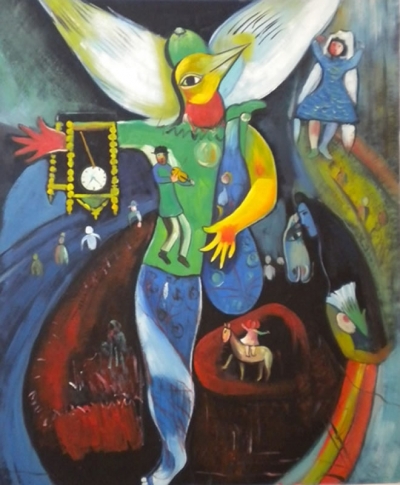 Picture: Marc. Chagall. (1945) - The journey of men towards the creation of soul. Painting entitled "The juggler": in the middle there is a character with the body of a man, the face and wings of a bird (freedom and dignity.) It stands on the circus ring: it raises its left leg up to its face (the difficulty of learning from one’s mistakes) and is wearing a watch on its arm (it marks the course of time.)

All the religions, without any exception, believe that men have had a soul since their birth.

Throughout the history of mankind, Giorgio Gurdjieff is the only one who has astonishingly said: "You don’t have any soul."

The only one! Despite the various religions.

Gurdjieff stands out from the crowd and claims that men have no soul; therefore, the place intended for the soul is actually empty.

Anyhow, we may try to create it.

Just like G. Gurdjieff, I know that we have come into this world with a soul, but the idea that men are born with a soul acts as a hindrance.

These are targets to be achieved.

Freedom, awareness, God - whatever you may call it - must be discovered, and it often requires great efforts.

It is hidden, dozy; it must be enlivened and brought to maturity.

It must bloom and bear fruit.

Conversely, I think that you were born free, with equal dignity, respect and rights. ... otherwise, we may quietly keep on telling lies, choosing beautiful words which thus lose their meaning.

We are not the same.

Mais nesta categoria: « Canticle of Mary and the Prophets – The Divine Law