Human rights falsehood - Human being does not exist 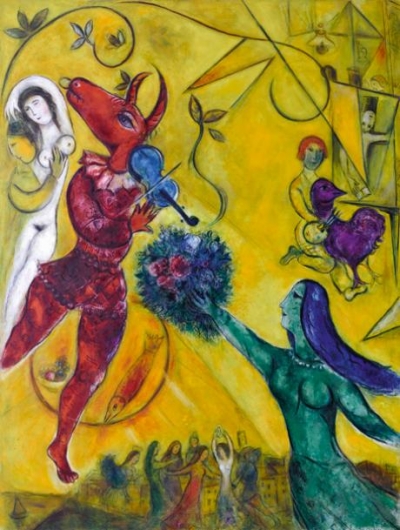 Fhoto: Marc Chagall - (The dance, 1950-52). Equality is a myth, it does not exist. Civilized society does not exist, we are still barbarians, if we don't recognize the uniqueness of each individual (symbolism, the girl holding the flowers as a gift) there will no longer exist a civilized world, human, living in love and joy.

Civilized society does not exist

I thought on human rights, specifically my thoughts as a prophet of the net, then lit on men, is shipwrecked on the so called United Nations, and on human rights day.

We must not forget a basic fact: we live in a hypocritical society.

A great philosopher was asked what he thought of civility, he answered precisely like this: "it's a good idea, but someone needs to turn the idea into reality. Civilization does not exist yet, despite what one thinks. It's a dream into the future. "

People who hold the power -political, religious and social, are in charge because civility has not been realized, the reason is simple: a civilized world, mature men,

do not need countries-all borders are false-

they do not need religions, because all these are fictions.

Look at the people who have been holding power for thousands of years-priests, politicians, multinational corporations, tycoons- they have all the means to prevent human evolution.

And the best way to prevent evolution is to convince man that he is civilized, convince him that he is already a human being, that there is no need to experience a transformation process.

Man's weakness lies in his believe all the lies that politicians and others, have spread while aware that civilization does not exist, there is something that has to do with "human feeling."

Man believes lies because it is the easiest way.

Recognizing not to be yet a human being is scary.

It removes the ground beneath your feet! All believe to already own the truth.

Psychological strategy is to convince others that we are all civilized.

And since thousands of people around you, parents-teachers-priests and leaders- believe it, it becomes impossible for newcomers to the world, helpless, not to be persuaded by this idea.

Millions of people lived and died believing that civilization was already made.

For this, I want you to understand that we are still barbarians.

Only barbarians can do everything we have done for thousands of years, human beings could not, in three thousand years, five thousand wars... and are we civilized?

In the middle of the 20th century, you were able to produce Adolf Hitler, Benito Mussolini, Joseph Stalin, Mao Tse Tung, despite this, do you still believe that the man is civilized?

But let's come back to the United Nations, and the objections of the UN Declaration, and it is this: "rights exist only when there are duties. the duties are the roots, rights are the flowers. There cannot be rights without responsibilities ".

However one dedicates one day a year to human rights... but none to the duties of man, which come before rights.

Nobody talks about the duties of man? Simply because nobody wants to give you your rights.

An example: " they say that all humans are equal to each other.

This satisfies the ego of all; yet this is a lie, one of my most dangerous lies told to humanity.

I tell you that equality is a myth. Do not even exist two human beings equal to each other ; I don't want to say that humans are unequal, I mean they are unique and if we don't recognize the uniqueness of each individual, there will not be any civilized world, human, living in love and joy.

The Declaration underestimates that one must love all human beings we're brothers in this, but none argue as two brothers do.

They also state that there should be no discrimination between men and women, between blacks and whites. Between races, religions, ideologies, but then who operates these discriminations we see every day?.

The initiators of the Declaration are white, all these politicos are white.

It is a scam. None of them gives value to those words, they are empty words.

These words are useful only to convince you that we are all equal; all brothers, that you possess all the same human rights, these are nothing but hypocrisy...

I'll be back soon on the U.N issue.

Mais nesta categoria: Right to Life - The Right to Love »